​These nerd alerts are free. Please help keep them alive by buying us a beer:

Each month we compile a short list of recently-published papers (full list here) in the world of running science and break them into bite-sized chunks so you can digest them as food for thought to help optimise your training. To help wash it all down, we even review our favourite beer of the month.

Welcome to this month's instalment of our “Nerd Alert”. We hope you enjoy it.

Please retweet or share this nerd alert with anyone who’ll find it educational:


Click the title of each article to reveal our summary.

What did they do to test the hypothesis or answer the research question?
— They recruited 14 young (~21 years old) males (8) and females (6) volunteers who had never resistance trained and were aerobically unfit (V̇O2max ~39 mL/min/kg measured during bilateral [both legs] cycling).

Table of subject characteristics.
— Subjects completing the intervention served as their own control with only one leg being aerobically trained (AC+RT) for 6-weeks and then both legs being resistance exercise trained (RT). For 6-weeks subjects performed unilateral (one-legged) cycling at 50% of their one-leg V̇O2max 3 times per a week for 45 minutes a session. Two weeks after the aerobic conditioning, subjects performed bilateral (both legs) strength training 3 times per week for 10 weeks consisting of squats, leg press, leg extension, hamstring curls, and calf raises with most exercises at 70-80% of their 1 repetition max for 3 sets of 10-12 repetitions. They were also given 25g of whey protein post resistance training.
— Functional outcomes measurements included 1 repetition max for squat, leg extension, and leg press to see whether the resistance training worked (increased muscle strength) and one-legged cycling V̇O2max.
— Mechanistic measurements included immunofluorescent staining of muscle biopsies to identify fibre type-specific muscle cross-sectional area, satellite cell content and activation, and capillary density.
— Statistical analysis included two-way repeated measures to compare pre vs. post-intervention changes in variables between the AC+RT (aerobic then resistance) and RT (resistance training) only conditions. To examine inter-individual (between-person) variability and identity “high” vs “low” responders, individual subject changes in satellite cell content, cross-sectional area, and capillary density were ranked in order of magitude.

What did they find?
— The interventions worked as desired. Firstly, aerobic conditioning (one-legged cycling) increased aerobic capacity (V̇O2max) of only the working leg and not the other leg, and then fell during the 10 weeks of resistance training.

— Authors concluded that 6 weeks of aerobic exercise training that increases V̇O2max prior to RT can boost resistance training-induced muscle strength and cellular adaptions and that this effect is associated with increases in muscle capillarization. Though we must add that this is in young and healthy but previously untrained folks.

What were the strengths?
— Each subject served as their own control with one leg performing the AC+RT and the other only performing the RT. This is a clever within-subject design that negates the need for a separate control group.
— The interventions did as they were supposed to. Increases aerobic capacity (and capillarization) and increased strength.
— To help maximise muscle protein synthesis, the authors provided subjects with 25 g of whey protein isolate (including 2.7 g leucine) after each resistance training session.
— In accordance with open science practice, the authors supply their raw data in an open-access Supplemental file.

What were the weaknesses?
— The study did not include single leg strength measures. It would have been nice to see direct evidence that the AC+RT group improved single leg strength in addition to the markers of hypertrophy and satellite cell content/activation.
— The most important comparisons are all associations based on correlations. The study design did not allow the authors to directly test whether capillarization augments the increase in the cross-sectional area of muscle fibres (or better yet strength).
— Although the authors report that “Random assignment (based on leg dominance) determined which leg would complete the AC protocol while the other would remain untrained”, this statement implies that subjects used their dominant leg for the intervention and, therefore, the leg was not randomly assigned.
— While post-session whey protein was provided to help maximise muscle protein synthesis, it is unclear whether subjects were in energy balance nor what macronutrient composition their diets were during the study — this is important because energy availability, carbohydrate availability, and total daily protein intake can influence the outcomes measured. It is also unclear whether the training sessions were completed in a fed or fasted state — this is important because training adaptations are influenced by the prandial state.

Are the findings useful in application to training/coaching practice?
For endurance athletes, no. (But, the findings do suggest that an endurance athlete might get a greater strength gain from resistance training than a non-endurance athlete because of their high level of muscle capillarity and V̇O2max.)
For strength athletes, yes.
Many strength athletes shy away from aerobic conditioning for fear of getting weak like endurance athletes. But, this study suggests that aerobic conditioning may actually help the muscle adapt better to strength training. This idea isn’t new and the fellas at Stronger by Science have written about how not doing aerobic training may be holding strength athletes back. All that said, we are mindful that this study included previously untrained folks so we cannot extrapolate to the same outcomes being found in trained athletes.

What is our Rating of Perceived Scientific Enjoyment?
RP(s)E = 7 out of 10.

What was the beer called? Bricks Don’t Roll.

Which brewery made it? Tiny Rebel Brewing Co (Newport, Wales).

What type of beer is it? New England IPA.

How would I describe this beer? Golden to the eye, piney to the nose, fruity and mildly hoppy to the taste, with hints of pineapple and citrus, and a smooth and pleasantly bitter aftertaste. It is true, bricks don't roll, but this brick is sessionable.

What was the beer called? Fly Line Vienna Lager.

Which brewery made it? Payette Brewing (Boise, USA).

What type of beer is it? Vienna Style Lager.

How would I describe this beer? It’s an easy drinking, warm weather, relaxing by the river beer (I guess I have a type). With a slightly yeasty and bready aroma, the beer has relatively subdued maltiness and only a slight hint of bitterness from the hops. It’s smooth, creamy, and not produced anywhere close to Vienna, but that’s only a problem for Thomas and not myself. I think I’ll have another tonight. (Note from Thomas: dispite living in Austria, I have no idea what a Vienna Style Lager is?!)


That is all for this month's nerd alert. We hope to have succeeded in helping you learn a little more about the developments in the world of running science. If not, we hope you enjoyed a nice beer…

If you find value in our nerd alerts, please help keep them alive by sharing them on social media and buying us a beer at buymeacoffee.com/thomas.solomon. For more knowledge, join Thomas @thomaspjsolomon on Twitter, follow @veohtu on Facebook and Instagram, subscribe to Thomas’s free email updates at veothu.com/subscribe, and visit veohtu.com to check out Thomas’s other articles, nerd alerts, free training tools, and his Train Smart Framework. To learn while you train, you can even listen to Thomas’s articles by subscribing to the Veohtu podcast.

Until next month, stay nerdy and keep empowering yourself to be the best athlete you can be...

Everyday is a school day.
Empower yourself to train smart.
Think critically. Be informed. Stay educated.

Disclaimer: We occasionally mention brands and products but it is important to know that we are not sponsored by or receiving advertisement royalties from anyone. We have conducted biomedical research for which we have received research money from publicly-funded national research councils and medical charities, and also from private companies. We have also advised private companies on their product developments. These companies had no control over the research design, data analysis, or publication outcomes of our work. Any recommendations we make are, and always will be, based on our own views and opinions shaped by the evidence available. The information we provide is not medical advice. Before making any changes to your habits of daily living based on any information we provide, always ensure it is safe for you to do so and consult your doctor if you are unsure.

Please retweet or share this nerd alert with anyone who’ll find it educational:

If you find value in these nerd-alerts, please help keep them alive and buy us a beer: 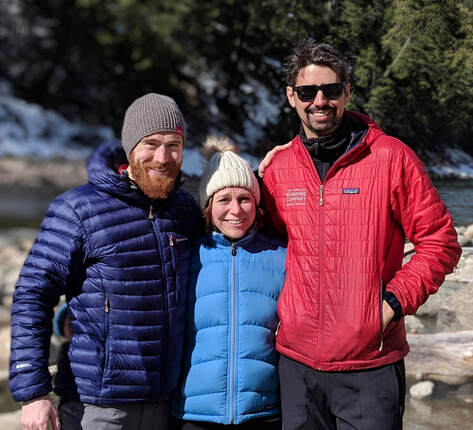 About the authors:
Matt and Thomas are both passionate about making science accessible and helping folks meet their fitness and performance goals. They both have PhDs in exercise science, are widely published, have had their own athletic careers, and are both performance coaches alongside their day jobs. Originally from different sides of the Atlantic, their paths first crossed in Copenhagen in 2010 as research scientists at the Centre for Inflammation and Metabolism at Rigshospitalet (Copenhagen University Hospital). After discussing lots of science, spending many a mile pounding the trails, and frequent microbrew pub drinking sessions, they became firm friends. Thomas even got a "buy one get one free" deal out of the friendship, marrying one of Matt's best friends from home after a chance encounter during a training weekend for the CCC in Schwartzwald. Although they are once again separated by the Atlantic, Matt and Thomas meet up about once a year and have weekly video chats about science, running, and beer. This "nerd alert" was created as an outlet for some of the craft beers they drink each month.

To read more about the authors, click the buttons:


Want free exercise science education delivered to your inbox? Join the 100s of other athletes, coaches, students, scientists, & clinicians and sign up here: